My original thought for this post was to write a tiny New Year story with Jesse Ash and Travis Daniel. I realized the story that really matters is the one I will be screaming on February 1, 2015. The world gets to meet those two characters that day. This will change my life forever. I will join the ranks of published authors. Ash on the Stairs will be published by Eternal Press. I am not an Indie author. I have a company working for me. They will pay me. I hope to make at least enough to buy a cup of coffee. I hope the world falls in love with my writing.

I wrote the first few chapters and sent them to a niece to see if I had something worth spending my time on. Her answer, a resounding, “Yes, keep writing.” I did. Armed with everything from my time here on Earth, I spun my story. I wanted the characters to be real, their motivations personal, their actions believable. The cast of characters presented themselves and came to life. The rough draft contained the bones of believability. The reader could suspend disbelief while in that world. Critique partners helped me polish it. It sold.

Jesse Neil Ash took the stairs at work. Her life changed forever. I wrote her story.

Yes, there is a lot of sex in the book. Melt your panties sex. That is not all there is. On February 1, you can read it. Get it at Barnes&Nobles and Amazon as well as Eternal Press. 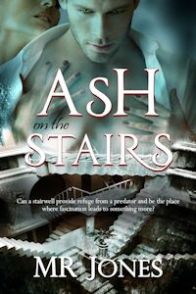