This is what I’ve been dreaming of for as long as the characters have been demanding their story be told. The cover for Slant Well is here. Award winning cover artist, Dawne’ Dominique produced this story-in-a-picture cover. Working from my descriptions, she captured the essence of the tale, a mixture of harsh reality and magic. She tweaked the type and shattered drill stem spells the title. It’s a pleasure to work with her again.

It seems an age of the Earth ago that I started writing Slant Well. It is the first novel I finished writing. I started several others, on my journey to become a writer and be published, but chalked them up to the learning experience and put them in the proverbial file drawer unfinished. Slant Well is a tribute to my persistence. I wrote until I got the story told, then cut out a large book’s worth of excess.

In order to get the story told, the characters in Slant Well took over my imagination and made their adventures happen. They taught me a lot. Now, the time draws near when they will go public with their story of murder, mayhem, magic, and vengeance. The first round edits are done. The manuscript is in the works to be typeset. One more round of proofreading and it will be formatted for the various e-book formats as well as for the print edition.

I went to the bayou in the book and took pictures of the beautiful and magical world there. 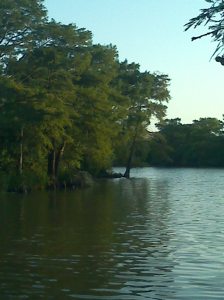 Take that backbone, add appendages and flesh in the form of characters to form the story. Tiers of characters, from the main characters to the one-scene one-line types, provided what I needed. They introduced themselves as I needed them. I started with the Woman because she tells the story.

The Woman in the formula is pretty to beautiful. Avoiding the short voluptuous helpless type seen in some books, I gave literary birth to Jesse Neil Ash, a young woman six feet three inches tall. She is a salute to all the tall beautiful women I know. Tall, skinny, and small breasted, she has a genius IQ, a nice backside, a Taser in her tote, and a mysterious back story.

Conflict showed up on page one and never got a full description. Jack Offiel turned into more conflict than I first imagined. Lucky me, he ran the full length of the story. I put every disgusting, leering, groping, greedy jerk I ever met into Jack. You know what they say about writers. Don’t piss them off, they’ll put you in a book and do evil things to you.

The Man in the formula has to be handsome, because honestly, look what happened to Quasimoto. So, Travis Daniel is handsome and wealthy, but certainly no suave lady’s man. His friends say he gets laid more often when he keeps his mouth shut.  Virtually devoid of social graces, he takes a chance and speaks to Jesse. Somewhere along the way, I became a romance writer and the story of Jesse meets Travis got told. 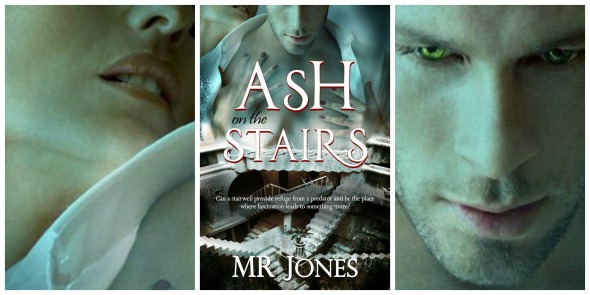 What a weekend! My debut novel, Ash on the Stairs, launched into the sea of readily available reading material. I held my breath, waiting to see if my baby would hit the water and make a ripple, or bounce off a frozen surface. I felt like little grasshopper, sitting with the blind monk, tossing pebbles in the water.

The ripples spread. At first the sales were to my family and friends. That was my pebble. One person finished reading it and posted a 5 star review. The ripples spread. My posts flowed out as one fan shared to another fan of the genre. Every thing I did in the planning stages paid off. That ripple ran beyond my first ring of core human contacts and passed beyond the friend of a friend of a friend.

I’m an adrenaline junkie with a background in nursing and advertising. When I realized word had spread beyond the reaches of my little world, I was as high as a human can get without drugs. I juggled between twitter, facebook (two accounts and six groups), google+, tumblr, Amazon, and the people who believed in a first time writer, Eternal Press.

Working my way through two days of seeing to and dealing with the transition from, “I sold my manuscript,” to “My book is published,” brought back to play a Don Draper side of me. It just flowed. I may be babbling, but this weekend was worth all the work. I started a little ripple and I’m ready to ride it to wherever it takes me.

I know this Sunday is Superbowl Sunday. I’m not much of a sports fan but I usually watch the game. This year I doubt I’ll see it. This blasphemous act will be done because there is something happening that day that is more important to me than football. My novel, Ash on the Stairs, is being released by my publisher that day.

I feel like the quarterback who depends on the rest of the team to to work with him to get the ball down field and across the goal line. I hope all my friends, fans, and readers will pass the word along so together we can take this story to the rest of the world. I want to make a touchdown. I want to run the winning play. I want the world to fall in love with Jesse Ash and Travis Daniel. 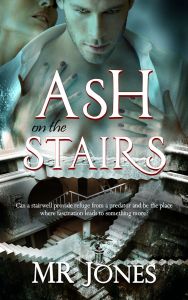 He shook his head. His golden eyes had that predatory gleam in them. “Little girl, you have so much to learn. Edward is my driver. He’ll wait for me. I can take all the time I want.” Travis Daniel, CEO, the man who gets his way, walked across the little space between us. “You took the subway this morning after I gave you money for a taxi. I’m not happy about that. I don’t want you to take the subway because I don’t want perverts groping you.” He stood so close I felt the heat of his body. “I want to be the only one groping you.”  Ash on the Stairs by MRJones

Only fourteen days until Ash on the Stairs is released. I have the pre-release jitters. Ticking down to the launch of my first novel is to me like the countdown for a space launch is to NASA. So much to go right. The culmination of a lot of work. Please let the rockets fire and a successful lift off occur.

I want the reading world to fall in love with my characters and their story. I hope what happens on the stairs will leave the reader wanting more. ISBN 9781629292151 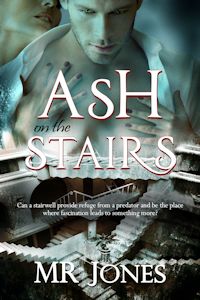 Press release for Ash on the Stairs

Jesse Ash takes the stairs at work to avoid a predator and meets a man with golden eyes. He confronts her and talks her into joining him for the evening. A game with no names leads to a night of sex. Will this continue when his identity is revealed? Travis Daniel owns the stairwell and the company. He wants Jesse’s heart. When the predator resurfaces, will they rise above the circumstances to find justice and love?

“Your book took me slowly, and I liked it.” Erin Lale, author of American Celebration.

MRJones is Marguerite R. Jones, a native and current resident of Beaumont, Texas. A lifelong storyteller, she took that talent and turned it into a career as a novelist.  A follow up to Ash on the Stairs, Ash on the Beach, is in the works. Slant Well, a contemporary fantasy set in Southeast Texas, will be published by Eternal Press later in 2015.

AAAAAAaaaaaaaaaaaaa!!!!!!!!!!!!!!! ASH ON THE STAIRS on EP website.
The sun peeked out and I opened an email from Eternal Press. It is from the marketing manager. Ash on the Stairs is now on the Eternal Press website in the to be released section. If you want to see it, go to Eternal Press. com. Things are running faster and faster now. February 1 is so near. The ISBN 9781629292151

This is such an overwhelming thing in my life. Nothing will ever be the same after the book is released. I will be a business. I must snap into business mode and be an efficient marketer of my work. Currently working on setting up the first book signing. I need a fairy godmanager.

~ Our eyes met. Intense lupine gold eyes stared into my pale, pale gray ones as if they could see the cold loneliness and desperation behind them. ~~ Ash on the Stairs by MRJones

February 1, 2015 is a date I will hold dear. The first of my novels to make it to a publisher will be released on that date. As the days tick away, my excitement grows. So much more to do to promote it. Setting up book signings and contacting the news media are on my short list. I need an assistant who knows what they’re doing. Since I can’t afford that, I muddle through, assisting myself. In an effort to entice you, dear readers, I now present the opening paragraph of Ash on the Stairs for your perusal.

My name is Jesse Neil Ash. Don’t let the name fool you, I’m a tall skinny woman from Texas. From the moment I was born, my life was spent in hiding. Not quite twenty-one, I moved to New York City to continue hiding. Soon after going to work in the mirrored high rise housing TDI’s Manhattan office, I met the man who changed that. 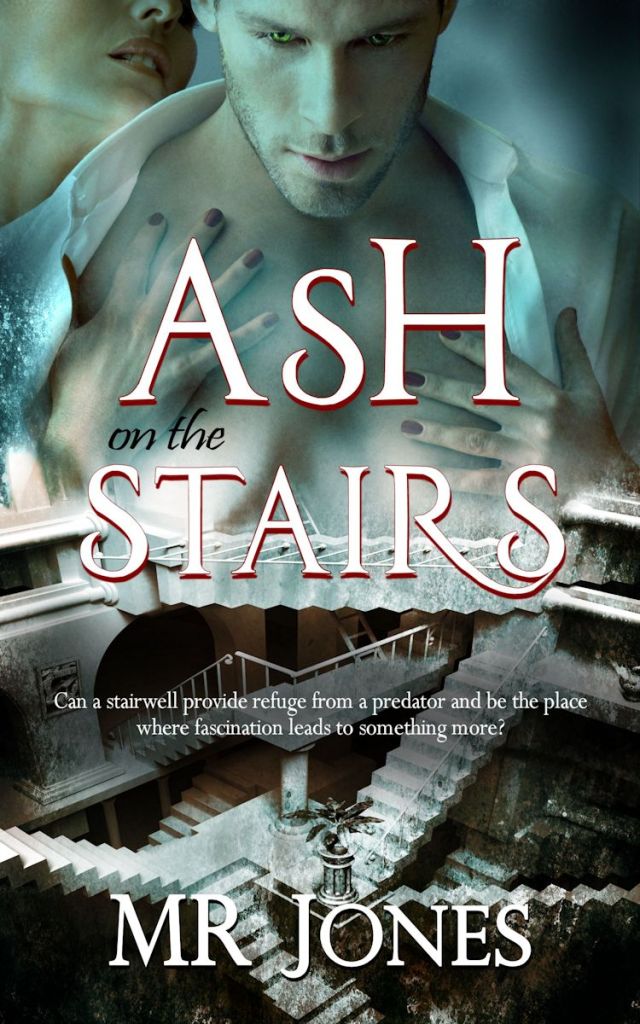