Slant Well, a tale of magic, murder, and mayhem in the oil fields of Southeast Texas is ready for preorder prior to the launch date, July 19, 2016. Smashwords and all the other ebook distributors will be glad to set aside your copy. 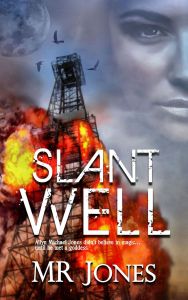 To break the ennui of his interminable existence, P.I. and occasional hit man, Allyn Jones takes a job in Texas oil country. There, he faces the greatest challenge of his life…a woman. Beautiful and lethal, Evelyn Eden wields ancient magic and easily rids the world of those who would kill her. Something about tall ginger Jones makes Evelyn stay her hand. She needs him. She wants him. But, for what? Hunter and hunted, will he survive the deadly power she commands? The murderous oil thieves who sent him up their game when they realize he is working with her. Arsonists go to Hell, hit men vanish, shapes shift, and an oil well explodes before a dragon is unleashed. The FBI gets involved, a Russian mob enforcer shows up, and guns blaze.