One morning I walked into the living room and was treated to a horrifying sight. A headless body in my path brought me to a full stop. Twisted as if still in those final moments before his head tore free, the body lay in a pool of crumbled excelsior. I recognized Toy Boy Roy, the former Christmas elf, his suit of sturdy brown cloth, crumpled, with stuffing spilling from the open neck. I looked around. His head, nowhere in sight.
“You fiend!” I said to the one I knew committed the crime. 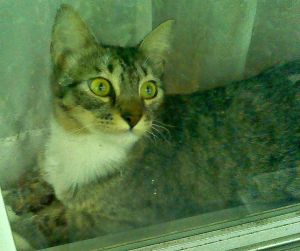 Morgan le Fey stared at me as if to say, “Give me my breakfast and you won’t suffer the same fate.”
“What did you do with his head?”
The tiny tiger looked away. She wasn’t going to make this easy.
I knew how she played with her victims. The elf’s head could be anywhere. I started looking. Nothing. I moved the body to the morgue.

That’s when I saw Pink Monkey hanging from the sun catcher. “I saw it happen!” she shrieked in my mind. “Morgan tore his head off and used it as a ball. She chased it all over the house. It was horrible!”
“Do you know where Roy’s head is? Did you see where she put his head?”
“No. I passed out. The horror of it!” Pink wasn’t going to be of much use in this investigation. I left her hanging out with the Cardinal. 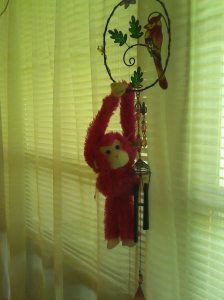 I asked the gang of miscreants waiting in the kitchen, “Did you see what happened?” They scratched their heads.
“Something happened? Breakfast isn’t served, so nothing’s happened,” grouched Biggie G. The fluffy gray thug had a point. 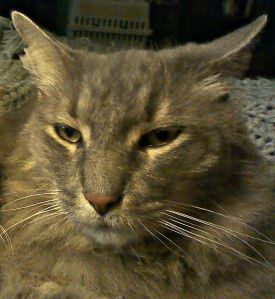 Breakfast served, I returned to my search for the gristly remains. I swept up the excelsior and dusted high and low. This murder left my house cleaner than before. It left me wondering when I would find the elf’s head. Had Morgan le Fey used her powers to transport it to another dimension as she had with other things? Only time would tell. I made another pass. Eureka! Under the dining table, Roy’s face smiled at me. I took it to the morgue. 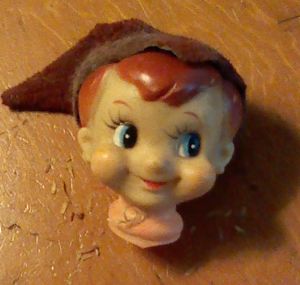 Grubby with cat spit and dust, his jaunty cap needed to be glued back on where the tiger’s teeth tore it loose. Those impish eyes begged to have his face wiped clean. I washed his face and stuck his cap down. While the glue set, I assessed the damage to his body.
Other than needing more stuffing, it remained intact, a salute to the tough fabric of his suit. When he retired from his first gig and started playing with the cats, I made him a new suit, one that would withstand the fury of the felines. It did. It just lost the head. I stuffed the body with red plastic newspaper wrappers.
Next, I had to reattach the head. The powers that let Victor Frankenstein bring life to his creation sparkled through the steel needle as I stitched around the neck. Getting his head in place, I drew out the slack and secured the body to the head with several knots.
It worked. Roy could sit up on his own, once again ready to enter the ring with the cats. 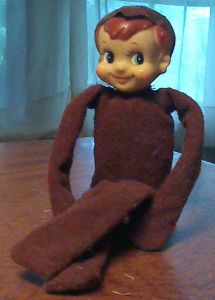 Pink Monkey dropped to the table and hugged the resurrected elf. 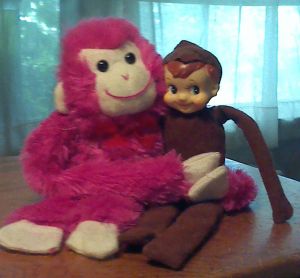 Morgan never admitted to being the decapitator. 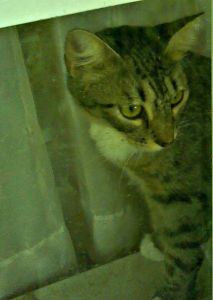 Her brother, Merlin the Gray, denies any involvement in the episode. 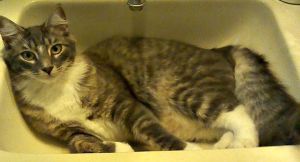 The rest of them aren’t talking.